Most people when they think about Croatia they just imagine beautiful beaches, with a blue and calm sea, sun, stunning islands, and summer. And of course, all this is true – during the summer!

During autumn/winter, some things change. It will be more difficult, not to say impossible, to swim in the Adriatic Sea and enjoy the beach, but most of the attractions can be visited during all seasons of the year and some places are even more interesting when visited outside the high season. If you do not mind not going to the beach and not swimming in the Adriatic Sea, this post is for you. If you want to venture into activities that only happen during the winter, this post is also for you. If you like to escape the heat and prefers seasons with fewer tourists, this post is definitely for you 😉 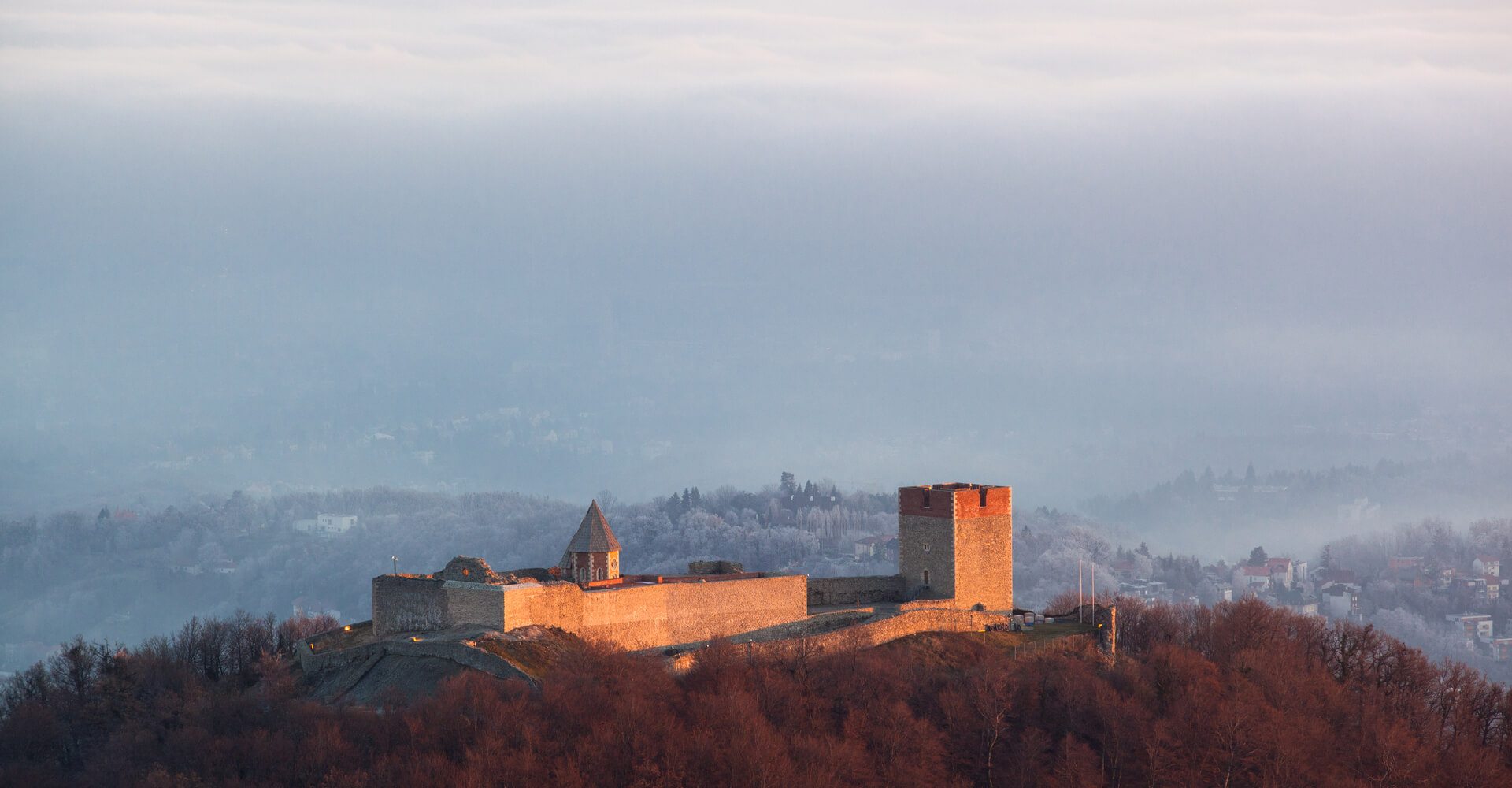 If you visit Zagreb during the winter, don’t miss the Sljeme, on Medvednica Mountain.

Few tourists visiting the capital of Croatia know that at the top of Medvednica Mountain is possible to venture into the ski, snowboard and even play with sleds during the winter. The Mountain also gets some very important ski competitions. Usually in January happens the Snow Queen event, which is a ski competition that welcomes athletes from all around the world. If you’ve never ventured into the snow do not worry, many schools offer courses of one or two days and equipment rentals.
The initial track starts at the top of Sljeme and then it stretches and becomes several other tracks such as red, green and blue. Each of them has a different terrain and slopes, and together, they add up to a total length of 4 km.
The infrastructure on the mountaintop has some traditional restaurants, a hotel and some apartments for tourists. 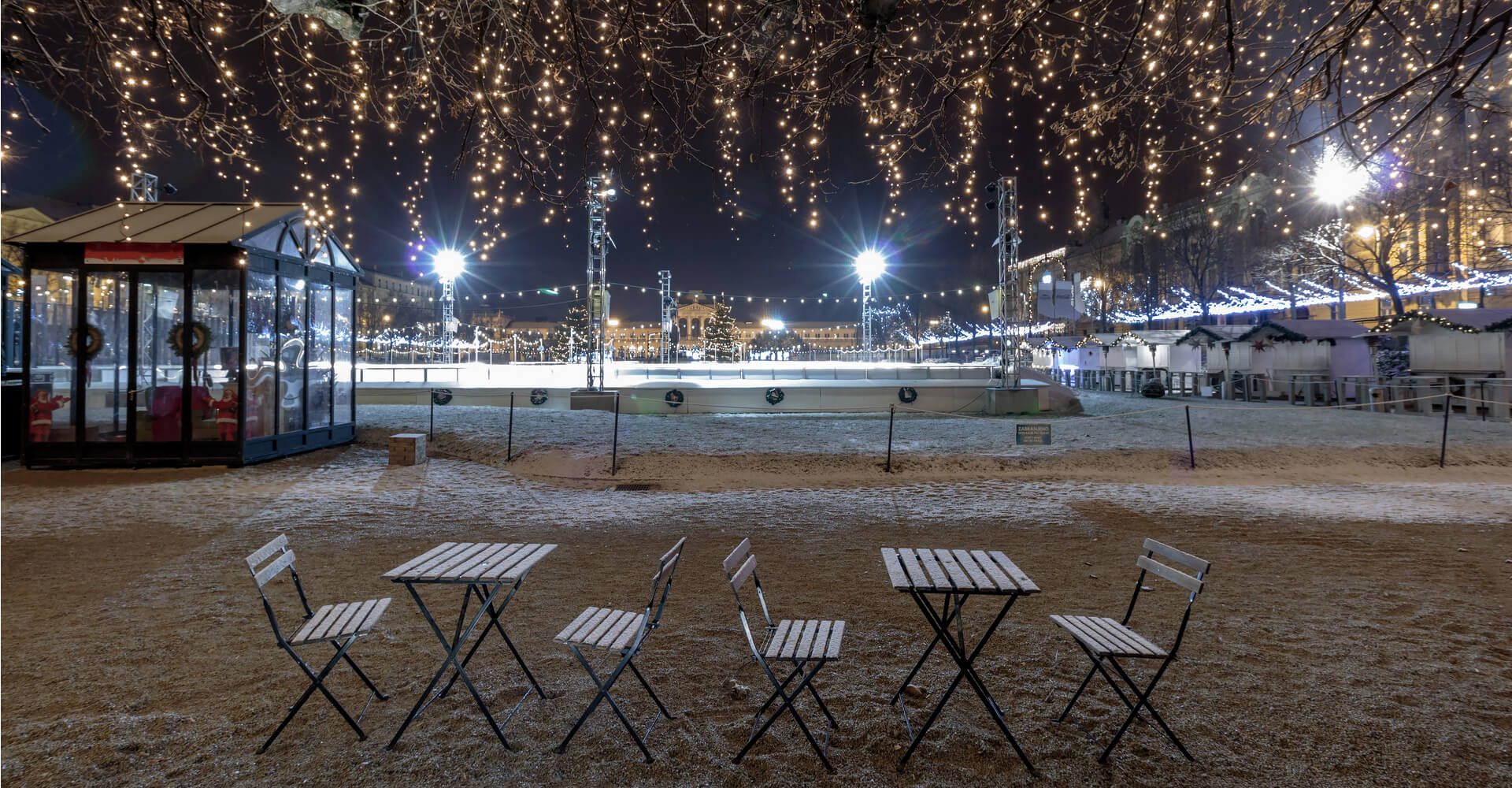 The ice skating rink, during the Advent in Zagreb, at the King Tomislav Park.

During the period of Advent, the city of Zagreb transforms itself into a magical land. And one of the most visible and cool changes that happen is the ice skating rink, in the King Tomislav Park, right in front of the central train station.

Advent is the celebration that takes place during the period before Christmas and lasts until shortly after the New Year. In 2016 the Advent in Zagreb began on November 27 until January 10. The event is wonderful and very magical. The main points of the city receive several stalls with typical food, local crafts, ice skating, concerts, shows, exhibitions and more. 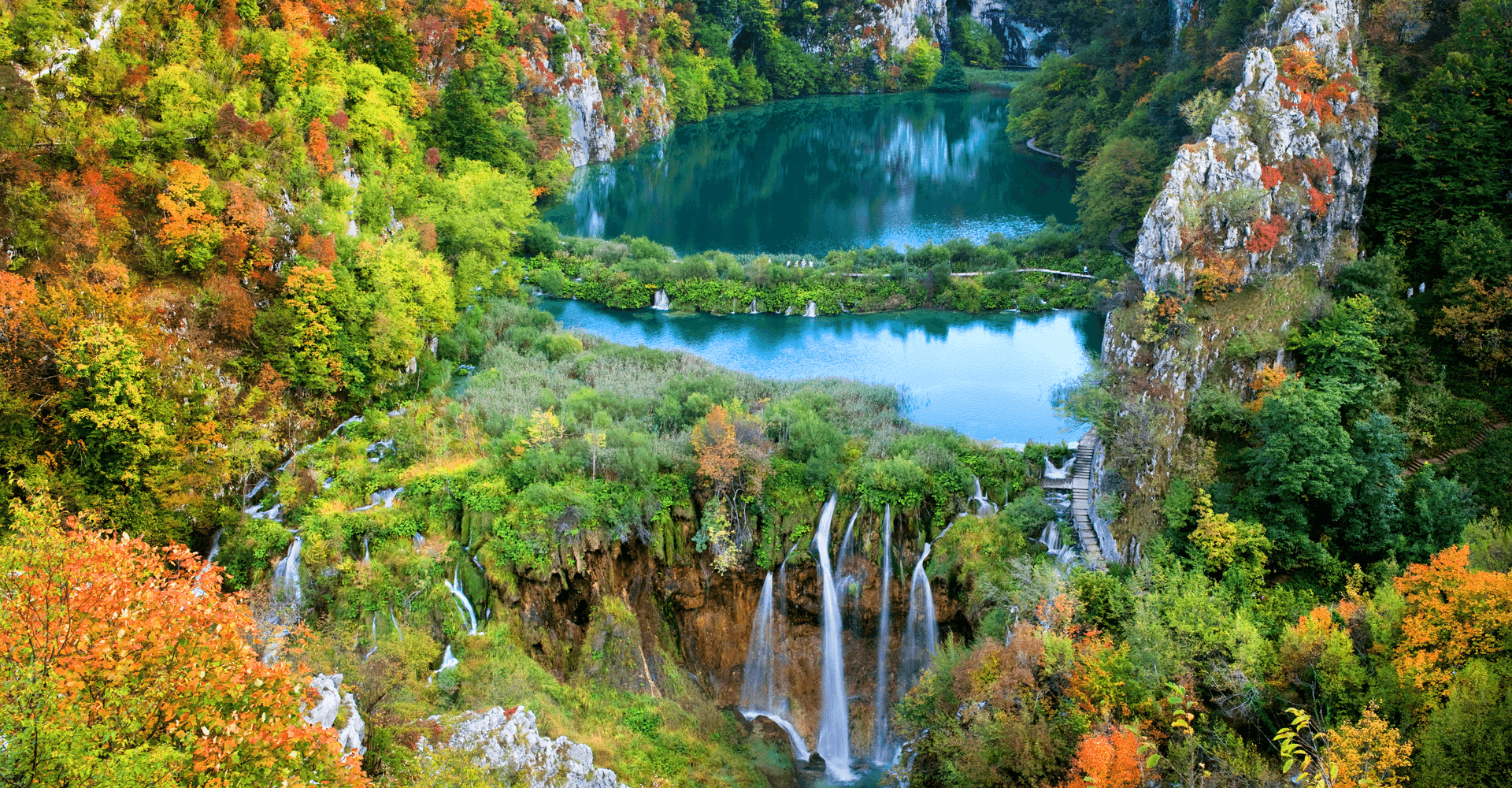 The wonderful Plitvice Lakes National Park in Croatia is transformed during the winter.

The Plitvice Lakes National Park is stunning and completely different each season. Many tourists end up visiting the park during the summer, when it is green, with crystal lakes, full of flowers and butterflies, looking like a fairy tale. But for most people who have visited the park in winter also, it is basically impossible to decide when it looks more stunning. When temperatures drop some lakes and waterfalls freeze leaving everything in a beautiful shade of white, and the color of the lakes become an indescribable turquoise. It’s like being in the recent Disney movie, Frozen.

Like much of the cities that have marked seasons and temperatures that are quite different during summer and winter, Croatia has some dishes that are usually only eaten at this time of year. Among these the most common threats are:

Sarma: cabbage leaves with ground beef;
Kobascica: the famous Croatian sausages, which can have different flavors like pork, pork with garlic and onion, sausage of blood (in Croatian krvavice), of boar and many other options;
Mulled wine and hot chocolate: with low temperatures hot drinks are always welcome. In Croatian mulled wine is called kuhano vino, and hot chocolate, vruća čokolada.
Fritule: they are like fried sweet dough to which you add sugar and cinnamon, or also chocolate syrup, cream, vanilla… 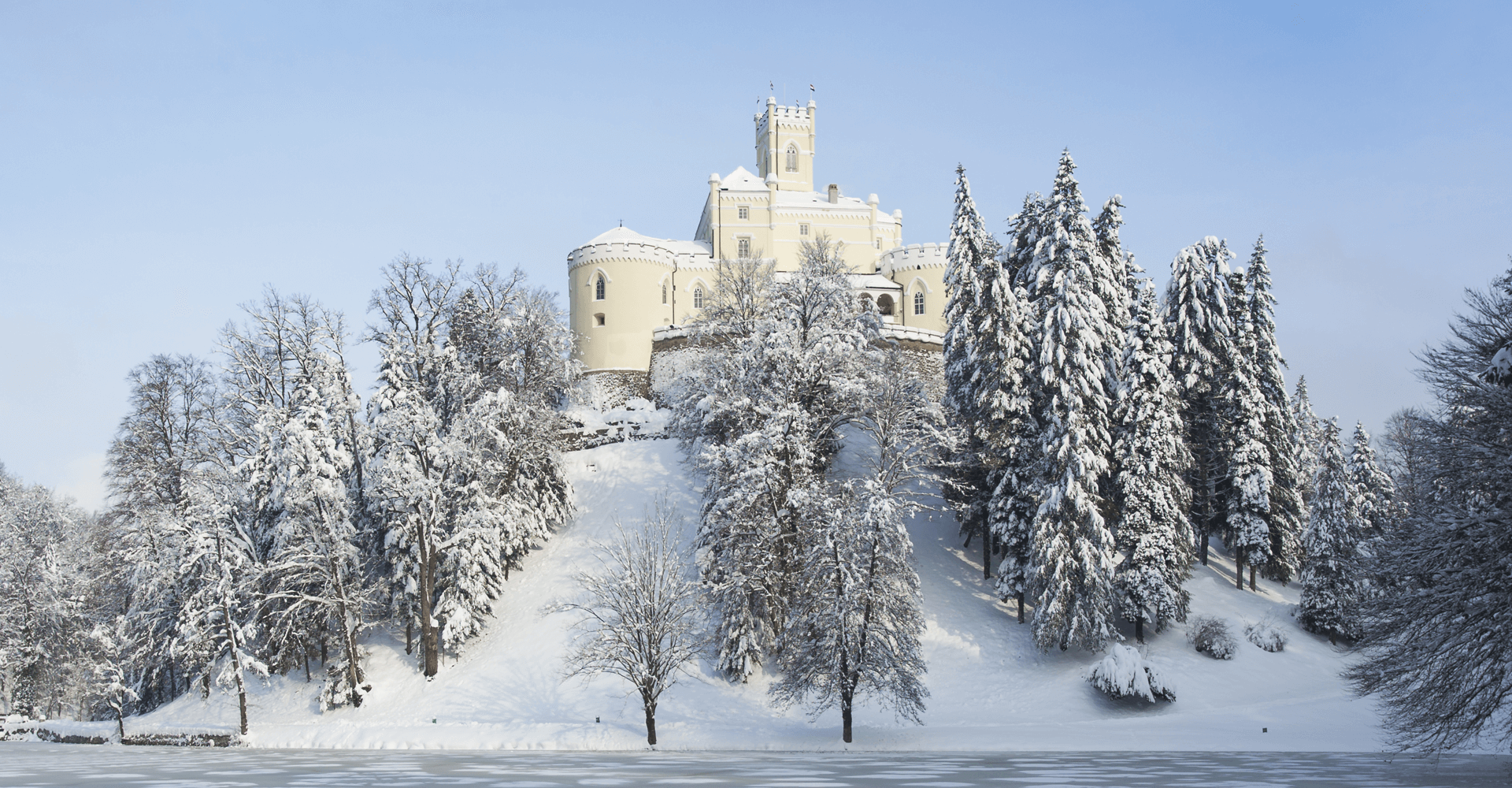 Close to Zagreb, it’s the Trakošćan Castle full of history surrounded by parks and a beautiful lake. This castle is considered the most romantic, beautiful and well maintained in Croatia and, during the winter, also transforms itself when the lake freezes and the green give place to the snow.

The best-known cities in the country can also be visited during the winter without major concerns after all; the most amazing things to visit are the ancient buildings, walls, palaces, and castles. The beautiful view of the Adriatic Sea will also be always there and, as a bonus, all the places will have much fewer tourists.
So, not that bad to visit Croatia during the winter, right? Come with us! Kamauf Tours makes your trip special during the four seasons of the year, with rain or sunshine 😉

So, it’s only fair that we admit that sometimes the weather in Croatia is very far from the summer images we are used to seeing in magazines and websites. With the seasonal changes and the arrival of Winter, several transformations take place in the country. The menus of the restaurants are fulfilled with heavier dishes that help to face the cold outside; the frequently drinks become hot chocolate, tea or a good glass of wine and, as expected, some activities and sports also take place only at this time of the year. So take a look at some of the winter pleasures.

Zagreb is also a great option for those who want to venture into the snow.

One of the most popular sports during the winter season is skiing. Few tourists know but in the Medvednica mountain, in Zagreb, where during the summer you can take long and fresh walks; during the winter, at the top in Sljeme, you can ski and snowboard.
For those without any experience, many schools offer lessons and equipment for beginners. Some bordering countries like Austria and Slovenia also offer various locations with ski resorts.

Another interesting attraction is the hockey games on the ice. Croatia has now four hockey teams, but only the Medveščak Zagreb (Zagreb Bears), is part of the Continental Hockey League (KHL), considered the most important professional league in Europe and Asia, and the second most important in the world, only behind the NHL, from US and Canada. Competitions generally take place in the months of August to February.

Ice skating is also a nice option for those who are in Zagreb during the Advent.

It is also during the winter that many school sports court turns into ice skating rinks. Guaranteed joy for the kids and for all those who want to venture on the ice skates. The beautiful skating rink in front of the Art Pavilion in Zagreb works only during the Advent time, which usually happens from late November to early January. But in other locations of the city is possible to ice skate until mid-February, depending on the temperature.

At the drop of the first snowflake, the fun begins.

Some of the most simple and inexpensive winter pleasures: slipping with sled in the snow, build an igloo, make a snowman, construct a fort with an arsenal of snowballs, and so on, the creativity never ends. At the drop of the first snowflakes, the kids start to prepare to take the streets and start to play. You can see a lot of different kinds of games, looks like everything is possible and despite the negative temperatures what you will not miss are the smiles and laughter.
So are you all ready convinced that is worth it visiting Croatia during the winter? Come and enjoy the delights of this magical time of year with us!

Like most European cities Zagreb transforms during Christmas season. The period before the 25th of December is full of celebrations and events and is known as Advent.

Advent in Zagreb was two years in a roll voted as the Best Advent in Europe. In 2016 it started on November 28th and some attractions continue until January.

Who already visited Zagreb would be surprised to visit the main sightseeing of the city at this time of the year. The atmosphere is completely different and even more magical. Especially after the sunset when thousands of Christmas lights turn the city into a real fairy-tale.

The King Tomislav Square, right in front the main train station, during Advent turns into a big ice-skating rink until the 10th of January. For those who prefer something less radical, the stalls around offer hot chocolate, wine, fritules, hot dogs and other traditional treats. To complete the magical atmosphere the beautiful Art Pavilion building is all lit up, welcoming everyone.

If we continue walking towards the main square we will also find the Zrinjevac park full of lights, local craft stalls, drinks, sweets and typical foods. In the center, the gazebo is the heart of the park, which receives musicians to cheer up the visitors.

Arriving in the heart of Zagreb, the square Ban Jelačića, we find the big Christmas tree, an area called Christmas fairy tale, the main stage, and the Advent candles at the font where the city was founded. If we’re lucky we can also see Santa Claus and even St. Nicholas.

Near the Cathedral, in the European square are more stalls of typical food and drinks and another stage for shows. More stalls of handicrafts and treats can be found also near the flowers square and the funicular.

Beautiful concerts also take place on the balcony of the National Theatre, on Maršala Tita square, and inside the Octagon building. Oh, I wish was Christmas all year long!

So, are you already planning to visit Zagreb next Christmas? 😉

For more information about the Advent in Zagreb visit the official website of the event.